Fresh off his debut novel Bounty, J.D. Cunegan introduces his intense follow-up, Blood Ties, a mixture of murder mystery and superhero epic that re-introduces the reader to his comic book-inspired storytelling and fast-paced prose. A 2006 graduate of Old Dominion University, Cunegan has an extensive background in journalism and a lifelong love for writing. Cunegan lives in Hampton, Virginia, enjoys reading, and is an avid auto racing fan.

When I was 11, I picked up my first-ever comic book, an issue of X-Men from the Chris Claremont/Jim Lee era. I’d never been much of a reader up to that point, and I certainly had never entertained the thought of writing, but once I got into comic books, it was like a switch had been flipped. By the time I got to high school, I was creating my own characters and crafting stories for them. By the time I got to college, I started studying journalism, and my career as a sports writer kept me writing, even when the creative juices weren’t there. But I’ve been writing, in one form or another, since I was 11 years old, and I have comic books to thank for that.

I don’t really have a favourite place to write, purely out of necessity. My day job is extremely time-consuming, and it keeps me on the road for days or weeks at a time, so I have to be flexible about when and where I can write. I’ve written in my office, in airports, on planes, in hotel rooms… if I have the time and the space, I can write almost anywhere.

Much like I can’t afford to have one place in particular, I don’t really have a set routine. I don’t outline my novels beforehand; outside of a general idea of a book’s plot, I’m very much a pantser. It can sometimes make the editing process a pain in the butt, but I find the less I plan, the more freedom I have when writing. Sometimes, that freedom leads to some pleasant surprises – and if I’m surprised as the writer, something tells me my readers will be surprised, too.

Not necessarily. If I spend too much time aspiring to be something or someone other than myself, then my work suffers. Reading helps my writing in several different ways, but at no point have I sat down and thought “I want to be the next so-and-so” or “I want to write the next insert-title-here.”

I created Jill, the protagonist, when I was in high school… and it’s a character and a universe that’s grown over the years as I’ve grown. Of all the characters I’ve created, Jill is my favourite, so it’s only right that my first published works are with her in them. The cop doubling as a superhero angle had always intrigued me, and I’m glad I get to play around with genre convention a little bit in that regard.

Blood Ties centers around the mystery of Jill’s father. In the first novel, Bounty, we 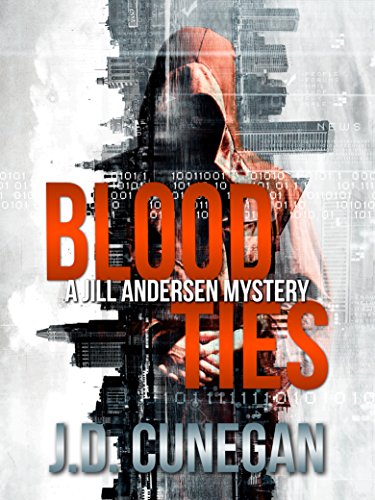 establish that Jill’s father had once been a detective, like her, but that he had fallen from grace after being convicted of three murders and sentenced to death. Blood Ties finally answers the central questions: 1) Did Jill’s father actually commit those murders? 2) Will he actually be executed? From there, Blood Ties unravels a grand conspiracy involving a shadowy cult called The Order, and they’re quite intent on making sure Jill doesn’t survive long enough to properly deal with what happens to her father.

Jill is the obvious favourite, but I want to point to a character making his debut in Blood Ties: Detective Earl Stevens. He’s a former college football player who’s been on the force for about 15 years, and his dialogue is some of the most unique and colourful I’ve ever written. He’s not a great interrogator, but I found myself writing a few chapters in which Earl interrogated someone, just so I could see what kind of stuff would fly out of his mouth. I wasn’t disappointed, and I don’t think the readers will be either.

I haven’t gotten too heavy-handed with messages in either Bounty or Blood Ties yet… though through Jill, I do convey the message of even one person making a difference (and conversely, how much can one person really do, in the grand scheme of things?). But my next book, Behind the Badge, will be message-heavy, tackling the issues of police brutality and racism.

The biggest challenge is always knowing when the book’s ready. There’s no solid end point when it comes to editing and revising, so it’s hard to tell sometimes when it’s ready to be published. There have been times where I’ve felt my book was ready, only to discover there was a lot of work still to do on it. The line is hard to see, harder to reach, and sometimes, you don’t realize you’re there until you’ve blown right past it.

That I can actually finish a project. The last decade or so has been littered with WIPs that held a lot of promise and were just… abandoned at some point. I never even finished the first draft. But now that I have two full-length novels and a digital short (Boundless) under my belt… I know I can see a project through to completion, and that really helps on days in which the words aren’t coming.

The best way to improve as a writer is to write. Simple as that. The second best way? Read. Read as much as you can, as often as you can. Don’t just read stuff similar to what you’re writing, either; read everything you can get your hands on. Even reading the newspaper can help. Also, I’m generally loathe to recommend books on writing, but Stephen King’s On Writing is as close to a must-have as it gets.

Behind the Badge, the third Bounty novel, is set to be released in June. I’m also writing the fourth novel in the series, Behind the Mask. I also have two separate projects in the works: a political thriller titled The Pen is Mighty and a supernatural epic titled Notna. I hope to have all three of those out by the end of 2017.