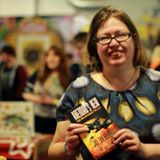 Jo Zebedee – I live just outside Belfast, and I write science fiction with the odd dash of fantasy. I enjoy gardening, and grow lots of my own veg, spending time with my family, and I read a lot.[divider]

When did you first discover your love for writing?

I wrote quite a lot when I was a teen, but I gave it up through my 20s and 30s, busy having a family and working. Then, the summer before I turned 40, I decided to write The Book and put aside 3 months to do it…. Four years later, I have two books out and a publishing contract for a trilogy, and I pretty much haven’t stopped writing since.

Do you have a favourite place to write?

I’m lucky – give me a laptop and somewhere to sit, and I can write. Which is good because I have a not-so-young family, a dog, a job, constant interruptions…. But, mostly, I write at the end of the kitchen table. For plotting, if it’s a sunny day I might pop out to my little table in my cottage garden with a notebook.

Do you have a writing routine or process that you adhere to?

In terms of routine, I have to be flexible. Some days I have lots of time, some a tiny window. Mostly, though, I clear whatever work-work I have before picking my kids up from school, and then will write until I realise it’s time to chuck dinner in the oven. At that point, my kids make me a cuppa and I close up for the day, although I might review plot and what not later.

If I’m editing for a deadline, I’m much more focused and will put in three or four hours a day, work permitting, to get it done.

Process-wise, I am a pantster, and I struggle through first drafts, frustrated at not seeing how everything hangs together. Once I mostly know what happens when, to who, where, I’m okay and will hone and tidy very happily.

Are there any authors or specific books you aspire to?

Gosh. Lois McMaster Bujold, for how she manages both sci fi and fantasy series so well. And for her character work – I’m very character led. Neil Gaiman, for his moments of utter beauty; The Time Traveller’s Wife for its blending of narratives.

But there are others I admire and love, whilst knowing I will never write like them – Isabel Allende and Carlos Ruiz Zafon, for instance. I love how they blend the real and magical, and how rich and poetic they are, whilst knowing my style of writing could never achieve it. That makes reading them bitter sweet.

What inspired you to write Inish Carraig?

I had been working in my Space Opera world of Abendau exclusively, when I realised I really enjoyed writing, and felt I needed to know I could write something else. I didn’t want to create another epic-scale world just then, so decided to base it on Earth, and specifically Belfast.

The original inspiration was a 75 word flash-fiction story I wrote for a competition, on the theme of innocence. That set up the main character’s arc, and things expanded from there. Once it had taken more of a shape, I knew I wanted to write a rocking sci fi adventure that captured the feel, and black humour, of Belfast.

Can you tell us a little about your book?

Inish Carraig is set in post-alien invasion Belfast. Humanity’s been defeated in the invasion, with the survivors left scavenging in the damaged city. John, the teenage protagonist, is trying to safeguard his younger siblings and agrees to carry out a job for the local hard man in exchange for food, but is arrested and sent to Inish Carraig, a forbidding prison.

There, he uncovers a conspiracy that threatens Earth, and everyone he loves. He knows he has to reveal the conspiracy – but he has to get out of prison first.

Do you have a favourite amongst all your characters?

In Inish, I like Henry, the policeman unwittingly drawn into John’s troubles. He carries a lot of guilt, having worked with the aliens to bring about the end of the war, and is desperate to see John’s family are safe.

I do like my conflicted heroes – Kare, the hero of Abendau’s Heir, my first book, is riddled with conflict.

Does your book contain a message for readers to consider?

No – in fact, I tried to steer away from a message. There is so much history in Northern Ireland, I really wanted to write a book that didn’t see the setting as the means to give some sort of message. I just wanted a book that entertained, and had a setting that readers would enjoy getting to know better.

Sure. The job John (and his friend Taz) are to carry out is to release a powder over the city:

John reached out his hand, holding the tin tightly. If McDowell wanted it sprinkled over Belfast, that’s what he’d do. Hell, if the big man wanted him to piss off the side of the cliff, he’d do it. He shook the box into the wind, watching the dust lift into the breeze. He put the tin in his pocket and clapped his hands to get rid of the sand. “Let’s go.”

They hurried down, skidding on the scree, half on their feet, half on their arses. They’d got partway down when Taz doubled over with a grunt. His face curled into a grimace. Sweat beaded his forehead.

“It hurts!” yelled Taz. He slumped to the ground. “It hurts everywhere!”

What would say has been your biggest challenge and achievement in writing Inish Carraig?

Getting Inish Carraig out has been a huge challenge. I wrote it as a crossover book that could appeal to both teens and adults, but when I sought an agent was advised to make it one of another. I changed it to a Young Adult book – removing most of the adult point of view – and got an agent. Cue excitement.

Unfortunately, when it went out the editors, despite being complimentary, were looking something a little older than the book had become, so the book came back to me. The disappointment was huge – not least because the agent dropped me when my next book presented the same difficulties.

On the back of that, getting the book out was an achievement. It would have been so easy to throw in the towel. But I’m most proud of returning it to its original crossover feel, and staying true to what the story was.

Reviews to date seem to support that I was right, and the book works as it is.

What have you learned about yourself as a writer through writing Inish Carraig?

That I’m not a one-trick pony, and can write more than one story, set of characters and world. And to listen to my gut instinct and trust myself a little more.

Do you have any advice for other aspiring authors?

Write and finish something – start with shorts if a novel is too much. Finishing and editing a project is different from writing it. And, start building a platform for promotion. No author can get away without promoting. Having a platform in place – a website and one decent social media platform, as a minimum – helps a lot.

And finally, do you have any future works planned?

Lots! I have book two of my trilogy, Sunset over Abendau, coming out in March with Space Opera specialists, Tickety Boo Press.

I also have a fantasy, also based in Northern Ireland, that I’m musing whether to seek a home for or self-publish next summer.

In the meantime, I’m about 30,000 words into a YA sci fi adventure, and am just starting to shape a new, steampunk-esque fantasy series in my mind.

“Michelle Dunbar is a participant in the Amazon Services LLC Associates Program, an affiliate advertising program designed to provide a means for sites to earn advertising fees by advertising and linking to Amazon.com.”